From June 1997 I had sailed as crew on three different sail boats, making it back home to Noumea in New Caledonia in the middle of August. I had been away for 18 months. The next thing to do was to ‘settle down’, have a job and lead a decent life. The adventure was over. 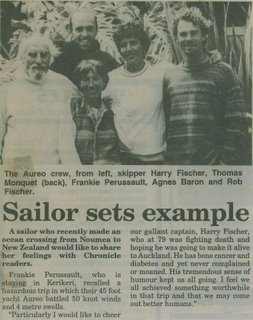 Was it? Everyday with the pretence to look for second hand books at the marina, I’d go and hang around there for a while. One morning I overheard a conversation between an American and a couple of other sailors. The American was saying in broad accent: “I hear you are looking for crew to sail down to New Zealand”… I jumped into the conversation. Sailing from Noumea to Auckland is known among yachties as being for sailors with experience only. By then, I had plenty of it and could claim for the job. A man said: “go and see my father, he’s the captain, the boat isn’t far from here.”

The boat was moored with her stern to the dock, with a cat walk like board between the two. As I jumped on deck an old white head man greeted me. No fuss. Very friendly. To the point. After he heard my story, he said you’re hired and went on saying: Look now, I’m 80 and do not take part in the manoeuvres, if we hit bad weather, we need more crew, go and recruit…
There are always plenty of notes stuck on the board at the marina from people wanting a crew position. I chose to phone one of them. The lady who answered said the guy who put the note up wasn’t there. I asked if she knew about his experience as a sailor. She said something like: oh yes, sure, he’s a teacher of geography. Well yes, I thought, there’s plenty of ocean on geography maps. I asked when he would be back: not for another week or so. Meanwhile I travelled with the captain’s son way up to the far north of New Caledonia where I had friends who said they knew someone interested.

We travelled by bus along the west coast of New Caledonia up to Koumac and then down the other side as far as Pouebo. An old bus took all day to get there, stopping here and there in the middle of nowhere. People would simply appear from behind a bush and nonchalantly board the bus. After a while we were the only white people on the bus. The stretch across the island at the top, between Koumac and Pouebo, had been burnt out by a bush fire and the bus followed the narrow road in a smouldering landscape.

We arrived late. It was dark. I found my friends, a nurse with her husband and their young daughter, involved in a major farewell party. In bush towns the teachers and the nurses are usually recruited from France and after a year or two these expatriates usually go back home to France or to another post on another island. A nurse was leaving. But she didn’t know where to. She was the one wondering if she could join us. Apart from being a nurse, which could come in handy, she was from Brittany and as such had salt water in her veins. She had never made a crossing but had handled small boats around her island in Brittany with her big brothers ever since she was a toddler. She came back with us.

Back in Noumea I eventually got in touch with the geography teacher. He was from Normandy and had some experience. He joined too. As it turned out, we made a great team and this crossing is on the list of my best sailing memories.
at September 22, 2006 No comments: