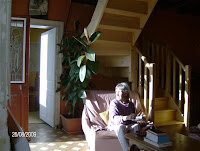 Now old and resigned, I enjoy roaming in my past worlds in daydreams. Sometimes the blunt hidden feelings get stirred again by a film on TV or on a dvd.

All this intro to say that I have been recently moved to tears by the film on Captain Cook produced by the NDR (Nord Deutsche Rundfunk) and put on the franco-german ARTE television channel. James Cook is my hero! I sailed on his tracks in the south pacific as much as I could. I had no means, just the mad urge. I often went hungry just to be there, because I wanted to sail like he did. Ridiculous. Me? a silly little french woman. But I did it. I did some. I did experience the fabulous joy of heading for the high sea and feeling so free.

On that ARTE film yesterday, I shivered on a few occasions: when they hit the reef, moreover when they got loose, that very moment when you feel your fragile vessel is floating again. It had been one of my very first sailing experience in the '60s on the Queensland coast of Australia. We had been hit by a cyclone (there was no warnings for cyclones in those days) and thrown onto the beach of a small island off the coast. The boat lying on its side shuddered all night under the pounding of a mad sea. In the morning when the weather calmed down, we were elated and screamed when we felt the boat was floating again...

The other occasion in the film "Die Reisen des Captain James Cook" that stirred me, was when they found the opening in the reef, a pass, to let them sail out to the open sea. I have experienced that feeling of escaping to freedom.
at January 03, 2010

What a delightful surprise to see a posting on your blog.....and what was even more surprising was that I had actually clicked on a Google reference to David Hobson and your blog came up instead.

Now, dear, have you metamorphasised into my favourite singer or not? I hope not as he is much better looking than you....lol.

And all of this was posted on my birthday too (3 Jan). How clever of you!!!

I didn't know that JC was your hero.....what adventures you must have had - you mad little Frenchwoman - but I'm glad you were able to have them. Glad to that you could relive them through the movie.

I just looked again and saw how the transition was made. The penny has dropped.

Alice!!! nice to be in touch again!