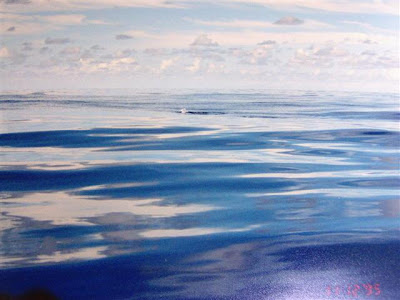 Maybe it's time I tell my 'wind and stars' story. I've kept it to myself until now as it is a precious memory and by writing it down I am scared to turn it into just a story. Precious memories can be defiled by people who take pleasure in making others feel small. My sailing years in the south pacific between 1995 and 1999 are jewels to me. Some will judge that they are useless pebbles of no value.

I wanted to go on Captain Cook's trail. However, I didn't have any means to achieve such a dream. Never mind. In December 1995 I hopped onto a small yacht with an American who needed crew from Noumea to Bundaberg. That was not going the right way as far as Cook's itinary was concerned but never mind.

The guy was drunk when I arrived on board. He had sailed from Texas across the Panama canal, then the long stretch to Polynesia and had finally made it to Noumea in New Caledonia. He was heading for the Queensland coast in Australia. It was just him and his sailboat. He used to take one crew at each stop to share the watch around the clock. I didn't find him to be a nice guy but I badly wanted to sail. So I joined. 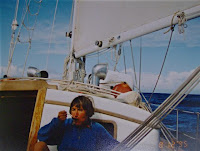 For my part, although I had had previous sailing experience and had done a sailing course, that was a long time ago and I felt totally inadequate. My contribution was simply to keep awake on my watch hours and wake him if anything had to be decided. One night I saw a large white light in the distance, thought it might be a huge tanker or something like that, woke the captain up... who laughed his head off, accused me of being moon struck, and said that it was the full moon rising. Idiot! Well yes, in the middle of the pacific ocean at night, all you have around you at 360° is... the wind and stars, and the moon. You soon get used to that and when later you have to sleep indoors on land, you feel totally clostrophobic.

During that crossing from Noumea to Bundaberg, roughly following the 21st parallel south, we sailed dead into the sunset every night. At one stage about halfway of the 800 nautical miles, there was complete calm, no wind whatsoever and the sea looking like olive oil. The captain kept saying he was going to start the engine but that meant using petrol and it meant additional cost. So he didn't. We waited for 2 days for the wind to pick up. I loved it. I can be zen on such occasions. Not bored but curious of what goes on around. First of all the sounds of the boat are very different. Lots of birds carry on seemingly playing on the water. Lots of birds in the middle of nowhere. You wonder how they got here. Actually throughout my years of sailing on the South Pacific ocean, I have always been amazed at the number of birds and fish, given the size of ocean, its depth and hugeness.

We hardly changed the sails, didn't tack, just got pushed to the Australian caost at about 7 or 8 knots. After the dead calm, we got 2 days of stormy winds and heavy sea. I was not feeling very safe. These yachts might look pretty when moored on a pretty pontoon, but by god they are small on the surface of the south pacific. Bobbing up and down like a cork. After the strom we were slowly coming closer to the coast but still had not encountered one single other vessel.

The captain saw a group of dolphins doing their usual butterfly swimming and coming from the opposite direction from us at quite a distance. He tapped the hull of the boat with his hands and the dolphins diverted their route to come and see us. Unbelievable. Incredible. They were 3 of them including a young. They swam under from one side to the other a few times, went round the bow. I was out of my wits racing all over the deck to see them closer. They really looked like they were saying hello, how are you, have a nice trip. And then they resumed their route and disappeared. 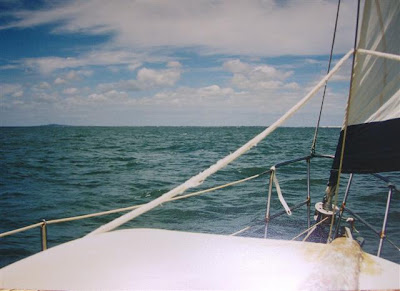 Finally, one day out of the Queensland coast, we saw one fishing boat. Back to civilisation. A big bird perched on the windvein as a permanent fixture. I guessed he wanted the job as pilot to get into port. There was no port, just a small fishing harbour at the mouth of a river. The captain was not too sure about coming to a mooring by sail alone. I forgot how and why we couldn't use the engine actually. And I was useless as a crew... So he called the harbour authorities, said his boat was badly injured, could we have an escort? And then he asked me to 'vamp' myself up a bit to make the Australia coast guard feel good about 'rescueing' us. I hated this man!

I have told elsewhere the story of the first night at the yachtclub. Personnally I was very happy to be back in Australia where I had lived for many years in the 60's, 70's and 80's. I left this strange captain and hitch-hiked to Brisbane.
at January 10, 2010