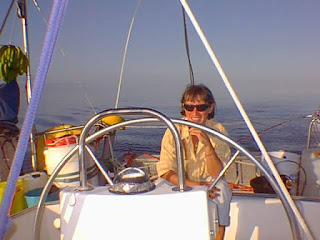 Between Vavau, a northern island of the Tongas, and Suva, the capital city of the Fiji islands, there is about a week's sailing if I remember correctly. It was the beginning of July 1997. We sailed west to Fiji happy to come close to the end of this 'leg' of the Rally Around The World organised from London in which about 50 yachts took place.

I was happy to be sailing, cruising to be precise, somewhere in the South Pacific where Captain Cook roamed two centuries before. The agreement with the captain/skipper/owner of the sailboat where I was the sailing cook (...or the cooking sailor!) was that I was to leave the boat in Suva. Fiji was the end of a leg and the next one was to sail directly to the Queensland coast. As I wanted to go home to New Caledonia I had to find another crew job with someone sailing from Fiji to New Caledonia.

What do I remember from this passage? The weather was fine. We sailed with fair winds or so, the so-called trade winds from the SW. When we got to the wall of reef running across the way from north to south still a few days sail to Suva, we had to sail through a pass, i.e. an opening in the reef, . As we came across the pass, the captain decided to stop the boat and go for a dive. My goodness, I thought, this is the worst thing you can do... a pass is a place where there is current and sharks hanging around to catch fish coming through it. I knew that from living on an atoll in the Tuamotus, not from books. I said it but it had no effect! Never mind, nothing happened. The captain and the other crew fellow took a dip in the pass named after the captain of the Bounty. William Bligh had come this way rowing in a canoe after he had lost his ship through a mutiny. I have a lot of time for him. That was a sailor! And besides, he had been a crew member on Captain Cook's last trip.

Just as we started going again and as the sea was quiet, and as it was not my turn for anything like cooking or steering on watch, I stood at the bow holding the mast. Well no, the mast held me... as I was staring into binoculars at a school of large dolphins coming through the pass behind us. I counted up to 200 and then gave up. They weren't dolphins but something like rorquals. They veered north after the pass whereas we were sailing west. I lost track of them after a while. It was a fantastic sight but no one on board shared it with me. I don't think it was at all mentioned in the boat log.

As we approached Fiji I was getting really fidgetty. The captain mentioned it. Well yes, I was hoping against all hopes that my boyfriend would come and meet me in Suva. 'Tiss' was a man I had met in New Zealand in 1996. We had shared our hectic lives for a time until I had left in a passionate tearing away move to Polynesia. I used to keep a journal in those days and the whole story of the mad passion I had for him is written in my book called 'Liyan'. I had left in January and this was July. I was still passionately in love with him. I was hoping he was going to come and meet me in Suva because I had sent him a message. How stupid can you be! The first thing I did when we got to Suva was to go and ask at the airline office if he was on an incoming flight. No, there was no one by that name on any incoming flight. Flop.
at October 02, 2010

I am sorry I haven't been commenting on these posts, Frankie. This whole Tramp of the South Seas series has me spellbound. Aside from living in Hawaii for nearly 30 years, I've read every Nordoff & Hall book I could get my hands on, plus Beaglehole's "The Life of Captain James Cook", Alexander's "The Bounty" and others. I still have land in Fiji and it calls to me. So your adventures strike a deep chord for me. Thank you for sharing them.

Glad to hear! I love sea stories too and my heart is in the South Pacific still!!!