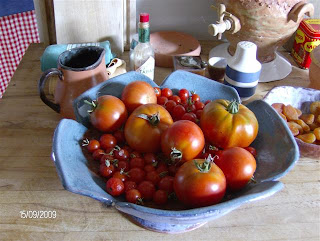 One other issue makes me mad, the way everything has taken a medical twist! You just can't say you like apples or stewed beef or whatever without someone correcting you to add it's good for your skin or your liver or some part of your medical self. I can't stand it! I simply cannot bare this narrowed vision of life.

Long before I studied anthropology at university, I had noticed that a given religious trait, when dropped as religious, is usually readapted as medical but not completely dropped at all. I'll explain.

When I lived in a kibbutz in Israel in the early 1960's, one day someone stopped me as I was reaching out for a yoghurt after I had eaten my beef stew. "Don't, you'll get a soar stomach!" was the warning. As I insisted to eat my yoghurt, I was severely warned of forthcoming medical problems. As a 'gentile' I had been raised with the habit of eating a yoghurt, or some cheese, after my meat dish and I could not see what the problem was. But then I learnt that in the Hebrew religion you cannot eat meat and milk products at the same time. It is a strong religious taboo. My kibbutz was not a religious kibbutz and its members would all have been atheists if you'd asked them. However they just could not eat a yoghurt after a meat dish. Their new explanation was that it was 'medically' unsafe.

I was young then, 19 to be exact, and it impressed me a lot. I made myself a mental rule that 'religious' slips into 'medical' when the religion fades out.

Here we go now years later the whole western world has dropped its religious believes and taboos and turned them into medical ones. It's amazing! I could have predicted it!!!

Actually when you look at it closer, in the stone ages the priest was also the doctor, I mean, the man who ruled the souls was the same one as the man who cured the bodies. The 'shaman' in many primitive societies is both the priest and the doctor. Even Jesus, when you think of it, is a healer as well as a preacher. The idea that religious belief and medical belief are separate entities is fairly new, really new...

Maybe I shouldn't be surprised then. But it makes me mad! I intensely dislike this whole medical approach to life. When you meet someone, after the usual weather chit-chat, you get the medical report, which parts of the body, which medicine, which doctor. And of course, the right diet for the right part of the body and so forth. Heeeelllpp!!!!!
at June 13, 2011

Email ThisBlogThis!Share to TwitterShare to FacebookShare to Pinterest
Labels: the soul

Oh, goodness, I could do a whole reciprocal rant about the marketing of "foodaceuticals" here in the US. Drives me crazy! Drinks are the worst, but even the candymakers can't stay out of it!

Ah! at least I have ONE other person agree with me!!! Thanks Bonnie

Make that two other people. It always amuses me to see how new studies overturn previous ones and what was once bad for you - for the last twenty years - becomes good, and vice versa!

...oh yeah Pandabonium, you need a good windvane to follow the trends! What gets me most though is this expression "good for you" instead "I like it" or "I love it"... you don't say "I love icecream" anymore, you say "it's good for you" LOL