212. FROM AMBOISE WITH LOVE

I say life is a string of Twenty Year beads! 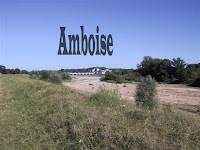 When I was a child, in that rural part of middle France where I live at the moment, my grand-parents had the habit to take us kids 'for a drive' on Sundays. One of those memorable Sunday drives was the trip to Amboise. Alright: AMBOISE (pronounced am-bwahz). From those trips I have kept a special interest in our good king François the first (pronounced fran-swah premier).  He grew up there in the late 1400's and early 1500's and spent his first years as king in that same castle that I used to visit with my grandparents on a Sunday drive.

When I came back to France in the year 2000 I had to go and visit Amboise again... it sent me into a whirlwind of History research about king François and his family. At about the same time an old book found in an attic was given to me. It was about king François' defeat at the battle of Pavia and his years as prisoner of the king of Spain, Charles the 5th, emperor of the Holy Roman German empire. Yeah! I have since then read that book 3 times. Something was nagging me.

François grew up as a happy kid, loved dearly by his widowed mother and his elder sister Marguerite. It was at a time when the world was reshuffled, a bit like now actually. Books started being printed in numbers, other continents had just been found and the Christian religion was being reformed. The future looked promising. François became king at 19. His queen was 15. She bore 6 children before she died in her twenties. At the battle of Pavia, François was in his early thirties, he was a widower and father of a large family.

At the battle of Pavia in northern Italy he behaved as if he didn't care about losing his life. He was not killed but he was taken prisoner. And then his behaviour appears to us here in the 21st century as thoroughly un-responsible. He acted as if he thought that to be a royal prisoner at the court of  Spain was going to be a royal holiday...

We often read History as if it was a film for which we know the end. Sure, WE know what happened afterwards. But when THEY, these guys we read about, live it through, they have no idea of what comes next. However they have some knowledge of what happened before. Kings in particular have a good knowledge of the lives of their predecessors. They know their History!

So I thought: if François behaved the way he did, it is because he knew of a similar situation that happened before. I started looking back as he would have. François was born in 1494... he would have been told of what happened one century before him. In 1356 at the battle of Poitiers the French king, Jehan le Bon, was defeated and taken prisoner to London where he lived as 'guest hostage' at the court of Edward the 3rd. Ah ha!!! The defeated French king in the 1360's was treated by the English king as a royal cousin on holiday!!!! It was just a matter of getting a royal ransom from him. But otherwise he had a good time holding a court of his own, with visitors, food and entertainment. So that's it. That's most likely what François had in mind when he was defeated at Pavia. It went very differently for him, very differently.

But here I am... in the midst of a quest to know what actually happened in the 1360's at the court of Edward the 3rd in London. And of course when you start looking, you start finding!!! Another thread gets into this web of events, the fact that one of the sons of the French king, hostage in London, also lived at the court of Edward the 3rd. And this young guy is the very Duke of my cherished privince of Berry. Ah ha!!! What next?... Next is that this young duke of Berry hung around with Geoffrey Chaucer, yes, him in person.

Well, I don't know the end of the film at this stage. I'd love to take the time to really get into this research.

Email ThisBlogThis!Share to TwitterShare to FacebookShare to Pinterest
Labels: history

This history is fascinating. (If we don't study history, the world is a mystery.) What a beautiful place.

When you come and visit one day with your lady, I'll take you to Amboise!

Thanks for this: we camped near Amboise many, many years ago and fell in love with the place - and with the local food. Good memories for a cold English day!