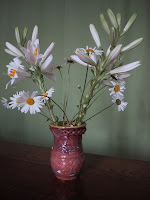 Friday night 1 March saw a special event take place at the church of St Iberius in Main Street, Wexford, Ireland. It was a service prepared by the Christian Women of the World Day Of Prayer Interdenominational, website: www[dot]wdopi[dot]org. The theme this year organized by the French group was: "I was a stranger and you welcomed me".

I had no idea of what it was when I was given the booklet and told I was going to be Woman number 5 on the roll of speakers in this service. We were only a handful of attendants from the Presbyterian church round the corner.

This service was prepared, acted and attended by women only, not that men were banned from it but they just did not turn up. The theme was, in my view, highly political and the leaflet I found plain propaganda. That's between you and me, of course. Otherwise I do agree that you must be kind to people in general, whether they are of your family, your street, your country or not.

However my interpretation of the story Jesus told about the good Samaritan would be that helping out a human being goes beyond and above any other consideration and that rites and rituals are in no way preceding the sympathy and compassion you should have for a suffering human person. It is, in my eyes, the basis for Humanism. I don't think Jesus had a view on Immigration policies here. Yet the booklet prepared by the Christian women of France sounded like a definite appeal to the French Ministry of Immigration!

Anyway... I was keen to be up to what was asked of me, delivering the text out loud at the right moment and not losing track. At one stage at every Christian service you get to mumble the prayer called 'Our Father'. Unfortunately by the time I turned the page of my booklet and realized what was happening, the prayer was well underway and I came in at the phrase: "Deliver us from evil" which I pronounced out loud. I hate mumbling prayers.

And I meant it: "Deliver us from evil"... any evil, all evil. I started thinking of a detail of my life that morning. Early before breakfast I received a text message on my phone telling me I was the winner (by decree I think!) of 2M pounds sterling. To claim it I had to send an email to 'winfree[at]aol(dot)com'. Great, I thought, I'll buy myself a second pair of pants and perhaps that renovated flat on the other side of the road! Of course, I didn't... send an email, but I walked to the shop that had sold me the telephone to report it. The young woman there said they get that sort of mail all the time, just delete it.

Just delete it. Well no, not 'just delete it', report it and make sure that this kind of evil is not reproduced on a daily basis to m'teen mobile phones until some poor bugger falls in the trap.

Evil has to be chased and tracked down. It is not simple misdemeanor. I really became familiar with it when I met someone who admitted taking pleasure at hurting people. This is the core of evil, taking pleasure at making someone suffer.

"Our Father, deliver us from evil". Jesus may have had his reasons to place this phrase in his recommended prayer.
at March 05, 2013

Email ThisBlogThis!Share to TwitterShare to FacebookShare to Pinterest
Labels: in IRELAND, the soul