A language is a large set of sounds that are coded. Example: bitch, beach, batch, are coded, but butch and botch are not. If you utter the first three to English speakers they will react, hear your meaning and reply... by another set of coded sounds like: fake or fuck, but fick or feek or fack are not coded and therefore not used to exchange ideas in a conversation.

1. A language is a large set of sounds that are coded.

These coded sounds are to be really accurate to be recognised to have their code deciphered so to speak. Yes, SO to speak! The coded sound is similar to a note made on a violin. If it is not just quite accurate it sounds awful and misses its purpose of making sense to the listener. Example: if I say I have put a new shit on the bed, instead of a sheet... you are sure to get a loud laugh instead of a normal reaction.

2. The coded sounds are to be really accurate to be recognised.

3. All humans have and use the same instruments to hear and utter these coded sounds.

Like a walky-talky we produce sounds and we receive sounds.

To produce sounds we have vocal cords that vibrate with air expelled from our lungs. We use all the various things in our mouth such as: the back and the tip of the tongue, the palate, the upper and lower lips, the teeth, the nasal conducts.

To receive sounds we have two ears, one on each side of the head. Each ear is equipped with a drum with a very sensitive skin stretched across it.

4. We produce sounds and we receive sounds. We are a living walky-talky.


Usually after this intro students are bewildered. They had never noticed!

When you are a baby you get to hear the same sounds over and over. By a trial and error process you guess and get to associate a given sound with a meaning. It takes some years for a child to understand all the coded sounds spoken around and it takes even more years to be able to utter and speak them out correctly. The process uses miming, aping, and memorising.

Coded sounds in one given languagage get to hit your ear drums always at the same spot. They become familiar sounds. Your brain classifies those sounds at the speed of light, well..., and unfamiliar sounds get ejected. Or classified in the same spot as a familiar sound. Example: the English sound written 'th' is not heard for what it is by French speakers but identified and classified as a 'z' or 's', e.g. ze English sink zat ze French are crazy.

When you try to learn another langue, i.e. another set of coded sounds unfamiliar to you, you have to try and stop this automatic filing of new sounds into familiar old slots. You have to LISTEN first. Like a violin artist musician you have to tune your ear to a brand new sound when it hits your ear drum. Once you actually hear that sound for what it is you have to find out a way to produce it. Usually when asking a native speaker of any given language you do not get help as they don't have a clue. If you are lucky you might just come across someone who knows.

For example, when I was trying to learn the Fulah language in the 1970s I simply could not figure out how to utter the 'ddh' as in 'biddho' meaning 'child'...until one day when I met a tall Fulah student in Paris who explained that it was a glottal stop, stopping the air from coming out at the back of your throat between the two syllables.

In a way it is easier to learn a language that has not been written. You have to concentrate on the sounds alone. Reading a foreign language with your own idea of its pronunciation is very treacherous. And very wrong. Yet it is the usual way we are taught foreign languages at school.

With the egg and the chicken we often wonder and ponder what came first in the order of creation, the egg or the chicken. In the case of spoken or written language there is no pondering to do. The answer is straight forward: THE SPOKEN LANGUAGE CAME FIRST and by far, by millions of years. Mankind produced and exchanged sounds long before some original dude thought of writing them down.

In the case of signs representing sounds, no one agreed on a standard of course! Between the Dutch, the French, the English and the Germans, a same and identical sound has 4 different ways of spelling. Example: the sound 'oo' as in fool in English is spelt 'oe' in Dutch, 'ou' in French and 'u' in German.

So good luck with your language study!

See this museum of languages in Paris if you pass by! 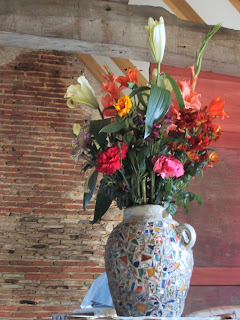 This post was kindly prompted by reading The Chaos of Correct Pronunciation from the blog Bouquet of Sharpened Pencils that you can find here on the list of my blogger friends in the right hand margin.
at March 28, 2013

Email ThisBlogThis!Share to TwitterShare to FacebookShare to Pinterest
Labels: in IRELAND, languages

Hahaha, thankyou Frankie for the kind mention. I enjoyed this post a lot, especially after struggling through a very beginner course in French a year or so ago. I was always very puzzled by the written language, and it was only by listening over and over to the tutorial CD that I was able to understand. Language is such an amazing, yet strange, thing! It's a pity I couldn't fit any linguistics units into my university course. It would have been something I would have really enjoyed, I'm sure.