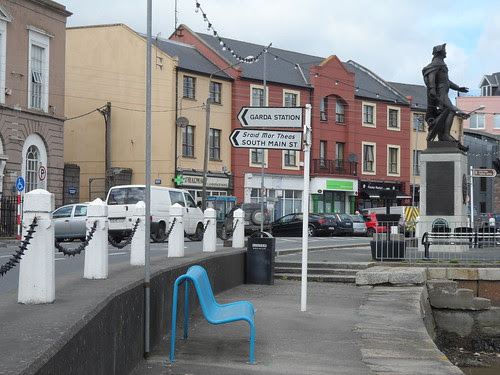 I have been living in Ireland for three months now and so far I have only liked and praised this country. Maybe it is time I allow myself to critisize a few things for good measure!

The first thing quite bewildering for a continental visitor is the lack of letterboxes on houses and flats. There is a slit in every front door but no letterbox as such, i.e. a hard metal box with a door and a key to that door and your name on the box.

As I occupy the second and top floor of a very old house, I first thought it was peculiar to my place. But when I asked at the Post Office about a parcel I was expecting and mentioned that unfortunately my place had no letterbox, the lady behind the counter assured me it was not special to my place. A slit in the front door of all houses, old town or new suburbs alike, was what there was for mail delivery. When I explained about letterboxes, she had doubt at their efficiency saying that then just anybody could get into them.

To add to that problem, as I share the house with three other tenants on ground floor and first floor, mail that is put through the slit in the front door falling to the ground is picked up by anyone in the house and placed anywhere. And as I did not want to bother anyone asking if they had seen the mail man with a parcel for me, I stood outside all morning one day waiting...

An old gentleman across the road came to tell me that if I had a parcel that would not fit through the slit in the door, I would be advised by a note telling me to go and pick it up at the special Post Office for Parcels. That's what happened eventually. I had to go and get my car parked way out of parking fees area, drive to an outside suburb, ask a few people where the Parcels Post Office was and finally enter a receptionist type of entrance where a man behind a small hole in the wall gave me my parcel after I produced identity papers. It was just an ordinary parcel with a book I had ordered on internet.

The second parcel I received was a present for my birthday sent from England. That time since everybody had seen me stand all morning for a parcel, probably feeling sorry for me, the tenant downstairs got the parcel direct from the mail man when he came and placed it at the top of the stairs in front of my door. That was great but not a regular procedure, of course.

My third parcel is now LOST... It has to be declared as LOST in order to have it replaced. When I left France I did not forget to take my camera with me but I omitted to take the lead and the charger for it. So, after taking plenty of photos when I first arrived it ran out of power and that was it, I could not make use of my camera any longer. After enquiring here and there and being referred somewhere else in vain I decided to ask my son to help. He has since ordered the said camera equipment from Amazon.uk which has sent the said lead and charger by post to my address here in Ireland. Well this time... standing outside the door for hours and/or smiling to the downstairs tenant has not helped in any way. I even drove to the Parcel Post Office out of town again to see if they had something for me. The man there did not dismiss me, he actually looked around on his shelves but then said that I had to have a slip.

Now a full 15 working days have elapsed since the parcel left the Amazon stores in UK. The correct procedure is to launched a LOST MAIL claim and have the articles sent again. Will I have the lead and charger for my camera before I leave Ireland, do you think?
at April 22, 2013

Email ThisBlogThis!Share to TwitterShare to FacebookShare to Pinterest
Labels: in IRELAND, travels