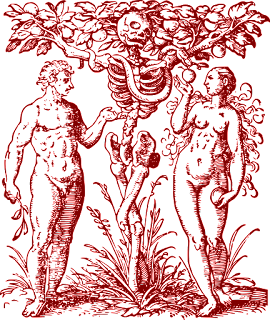 "You shall work for your food"... God is known for having said to the two Humans who had taken the liberty to do what they fancied without asking permission to their creator. It is this very act of rebellion that establishes our humanity. All other animals are completely dependent on their genetic programming, whereas these two characters taking a side road definitely establish the principle of liberty. Thus creating humanity. Writing this here, however, sounds total blasphemy. Adam and Eve had fun tasting this and that, some say figs, others say apples, or pomegranates why not, as well as tasting their freedom and getting the knowledge thereof. Why did God punish them? That's what the French ask themselves to this day. I wonder whether God was English or French... If Adam and Eve had been called Alain and Brigitte, it would have been so very different. You see, Alain followed Brigitte picking and biting into an apple because she was so very pretty, so very desirable and sexy. But Brigitte moved over to pick an apple because Alain was so handsome and desirable that she wanted him to follow her to share that damn apple. After all, God made them that way. I really fail to understand why he punished them. The act of love is "divine", strictly speaking. Turning it into some sinful hygienic need is nonsense. And evil. The relationship between genders has turned sour in our daily lives. It is becoming more and more difficult to approach each other in trust and playful flirt. Men don't seem to care. They're happy among themselves playing with a ball or with a dog or their car or their computer. Women over rate their prettiness by loading their faces with glossy red stuff on their lips, on their fingers, and dark sticky stuff on their eye lashes that prevents them from crying whenever they feel the need. Emotions are stated on the screen alright but not, oh god no, not in real between a man and a woman. And if women overrate their prettyness, men on the other hand underrate their handsomeness. They don't care looking attractive, desirable, appetising. They don't care. To share an apple with Brigitte is an ugly sin. I might even get censured for writing all this. In my own experience, being French, the difference of behavior in a gender relationship with an English speaking man is huge and I just can't fathom it. Once for instance with an English speaking lover, as he usually wore drabby old underwear, I bought him some sexy looking boxer underpants. He said he liked them but the day when I visited him, did not wear them but had his usual old shabby ones. The message I got was that he did not give a damn about making me desire him. Men have an erection when they desire a woman strongly. For women it is not so visible, the desire is more inside your womb. It could be why men think they don't have to trigger our desire... since we don't have any visible sign of it. Another more general example. I derive pleasure at putting my hand through a man's hair. Nowadays the fashion is for bald heads! Not very virile for a handsome man. Turning me right off. That too does not show in a woman. When a man is "turned off" he loses his erection. For a woman it is again totally invisible to the extent that men wonder why women run away from them. Shall I go on? Maybe not. I just wish God had been more understanding...
at January 13, 2017

Email ThisBlogThis!Share to TwitterShare to FacebookShare to Pinterest
Labels: men