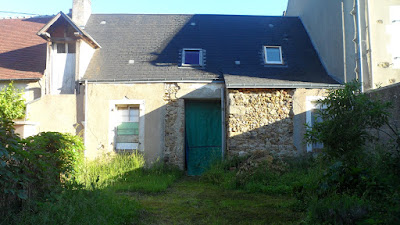 It’s a French datcha. In rural France. I’m not Russian. I’m French and, in France, if you own a house in the countryside you’re labelled a filthy rich bourgeois and therefore on a list to be eliminated… I exaggerate just a bit. The history of that little “cottage” goes back to my great-grandfather, i.e. my father’s maternal grandfather, Jean Georget who died when I was 12. He was an enterprising kind of guy and worked hard at making the family successfully climb the social ladder. He once bought that tiny house where his wife, Marie Momot, worked as shop keeper of that one and only grocery shop in the village. They sold that house when my father was born. I bought it when my father died.

But you see, I was an absentee owner for a long time. When I came back in 2000 the place was derelict and not habitable at all. I started getting it renovated in 2006 having the granary, attic if you prefer, turned into a small flat with all modern commodities. My finance has not allowed me to finish the job. The bottom part is regularly occupied by swallow families because the windows are missing. This year I had the place closed with wooden planks across the openings so birds couldn’t come in. One swallow couple still made it through and a new family is hatching. Alright call this saving the planet if you like! However, in my area swallows are not an endangered species.

So… as I really like the place I sometimes live there, upstairs, when the weather permits. It is not insulated and it gets below zero in winter and above 35° in summer. I use it as a datcha to tend my garden, grow vegetables and enjoy swinging in my hamac listening to the grass grow.

So far so good.

The thing is: I have neighbors… and the neighbors have me. Although I was born there, in a bedroom upstairs of the next attached house and despite the fact that my family lived there for centuries … (well, maybe, I should write “because” I was born there etc)… the fact is that the people living next to me are definitely not friendly. I’ve been putting up with very negative, not to say completely nasty, behavior. Some of it I wrote in a previous post under A car, a bicycle and a dog  but I usually put up with it with a grin.

Today I am typing this post to air my… my what? anger, distress, disgust, nerves… looking here on the world wide net for some sympathy and support, if only virtual that’ll do.

The neighbors at the bottom of the garden keep complaining that the space along their fence is unkempt on my side. They built a fence that should allow them to leave me alone with my unkempt side of it. But last year they spread some stuff that killed a small honeysuckle and a young lavender I had planted there. I then planted 4 young bamboos with the idea they’ll grow tall and thick and will hide me from the neighbor (or vice versa). Well this year they spread some more stuff that killed one of the bamboo, an expensive red one. I guess they meant to kill the big shoot from a dead and removed tree that was growing right on the fence. Now… the most outrageous is that they went and complained to the parish council head (the ‘maire’ in French) that “my” grass was growing through their fence. Gee wiz!!! I have to add to this list the fact that they had dogs that barked relentlessly and quite nastily when I stood on MY side of the fence at the bottom of MY garden. They lost one dog, apparently poisoned by some other neighbor, and so the barking is bearable now. Who poisoned the dog is another mystery in the village.

In this part of France houses are built in a row and all attached. So I have a neighbor attached on my right and one on my left as seen when looking at my front door from the street. Actually I have 2 front doors, one for the former granary small flat upstairs and one for the swallow headquarters downstairs.

My neighbor on the right hand side is that lady who got my car sent away as she thought it would bother her if I parked it in my garden. I won’t expand on that nasty relationship. It’s too bad. One good thing to say is that she is a good gardener and has turned her bit of land attached to mine into a lovely looking little veggie patch with flowers and fruit trees. She has invested in some kind of contraption to keep rabbits. They don’t bother me. She said she got 9kg of meat from them.

My neighbors on the left hand side are a young couple who bought the house recently. That house was my grandparents home where I was born. It was a heart break for me when my cousins, who inherited it, sold it.  I said so to the new occupants one day. They don’t speak to me now!  And when I am not there they allow themselves to come through my garden to trim their bayleaf huge tree (planted by my grandmother years ago) and build a wire fence on top of the wall between us without mentioning it to me. They also have a husky dog who barks and laments loudly every day. Poor dog… not his kind of life and not his climate for sure.