In France this autumn YELLOW is the color of disagreement and disrupt. 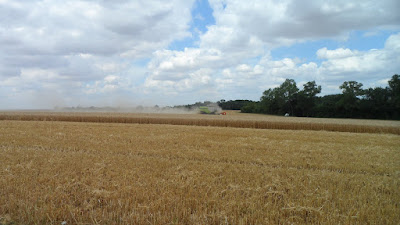 As a French citizen, born and bred, I have not been surprised when the volcanic folk movement erupted. At first I thought it was generated by extremists, extreme right wingers and extreme left wingers, because of their usual way of expressing dissent. I soon figured it was a general folk revolt. And I mentally joined. The idea of wearing the yellow jacket that everyone is bound to have in the car for safety reasons, that idea is absolutely brilliant. It makes you quite conspicuous and no one can tell you to take it off as it is mandatory to wear it when on the road in case of trouble.

Rulers and members of parliament were taken by surprise, they say, it only shows how far deaf and blind they are. In my French blog back in 2013, i.e. five years ago, I was writing about how our government and rulers had become “ogres” eating up their citizens and how the motherland had become such a cruel and bad mother . In December 2012 I even published a post under the title “Freedom has been moved away”.

…well I guess those people in government don’t read my blog!!! Or, they read it judging it as poop. I mean, uninteresting, fallacious, stupid, old fashioned, ridiculous and coming from someone unworthy of being taken seriously. I am not the only one, though, in that position. How many bells should we chime for rulers, those supposed to care about the welfare of the inhabitants and citizens, to listen and care? How many sirens? How many alarms? Now they kind of hope that it will simply disappear like in a bad dream.

A bad dream. Let them know that people on the ground are the ones producing the nation’s wealth. The farmers, peasants, miners and truck drivers, are the ones who bring forward all that abundance and prosperity that those in government can use to show off their power to the world. And on top of that, they are used to live in the rough hard ways. Like those peasants sent to war to defend our borders back a hundred years ago. Talking of celebrating those past glorious days! The French folks wearing the yellow jacket today are the same ones. They’ll grin and put up to hardship but will hold out. They’re prepared and ready to hold out. Make no mistake.

As Montaigne once wrote : On the most handsome throne in the world, you’re but sitting on your arse…

Email ThisBlogThis!Share to TwitterShare to FacebookShare to Pinterest
Labels: politics